The first two weeks of Brooks being here was nothing but complete bliss! My parents were in town for the first week. My mom cooked me the most scrumptious meals. They were a huge help with my oldest son while Brooks and I worked on establishing breastfeeding. My milk came in BEAUTIFULLY and Brooks was truly eating like a champ. I am a definite believer in the saying, “Fed is best,” but I had prayed so hard for a positive breastfeeding experience this time around. Seriously, I remember praying, “Lord, make me a land flowing with milk and honey!” And man, did the Good Lord deliver!

Brooks left foot was clubbed, just like we were informed during my pregnancy. We knew the process to correct his foot would be intense, but at this point, we did not know the details of what this would look like. Early on, we noticed that Brooks was a very noisy breather and sleeper. I was enjoying all the newborn snuggles but I was also thankful that Brooks would let me lay him down to sleep. It was nice to have the option of being able to lay him down. He was easygoing, sleeping three-hour stretches at night, sometimes four hours (!) and he was taking 3-hour naps during the day. Brooks would let me hold him for naps, he would sleep in the car, the stroller, AND he would sleep in his bassinet.

While we were in the hospital, we were told that Brooks had some fluid in his lungs from being born so fast but that it was nothing to be concerned about. During these two weeks, we had fears about his noisy breathing and the congestion we could hear when he would take a feed from a bottle. However, my husband and I were not overly worried as we waited for this to pass. Overall things were going great. Brooks was eating, sleeping, and pooping. What more could we have asked for?! 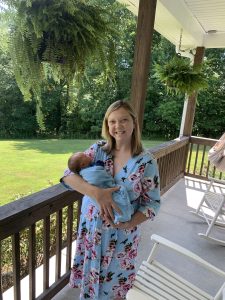 Then, week three arrived and I have chills just thinking about it.

Brooks’ breathing worsened drastically. I remember not sleeping at all one night because Brooks sounded like a pig rooting the Entire. Night. Long. He started tugging, pulling off my breast, and arching his back while breastfeeding. I could also hear his little tummy rolling as he was eating. When we would hold him during the day, his nostrils would flare, and he would breathe with a pitiful pant. Brooks was also snorting and snoring- I mean so deep that his entire body would lift. Like the switch of a light, he stopped letting me lay him down to sleep. As soon as I tried to lay him down, he would scream and cry a painful cry. He started sleeping a mere hour at a time at night (if we were lucky) and his naps were twenty minutes long at THREE WEEKS OLD. His breathing was so loud and strained that it would wake him from sleep. I will tell you this: I have some of the gnarliest videos of my baby’s breathing on my phone- and gnarly is not even a word in my Tennessee vocabulary! It is the only way I know to describe the chilling and terrifying sounds that were coming out of my three-week-old.

I’m going to make an incredibly long story a little shorter and get right to the point. My newborn was diagnosed with:

– Severe Laryngomalacia that required surgery and an overnight stay in ICU

At three weeks old, we made our first trip of many up to Vanderbilt to start the procedure to correct the clubbed foot. I have never been more thankful to have a mask on because as the doctor went through every step of correction, the tears fell harder and faster. Somehow with that mask on, I felt less seen, which was what I needed in that moment.

A cast for his entire left leg and foot for 6 weeks with a weekly visit to Vanderbilt for a new cast. 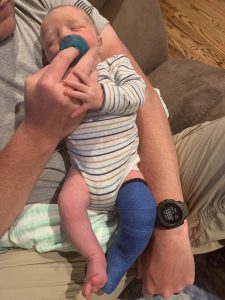 A tenotomy on his left foot- a surgical procedure where the tendon was snipped on the left foot to allow movement up and down. This was a procedure he was awake and numbed for but that I could hear every bit of, as I was required to sit in the waiting room while he screamed. 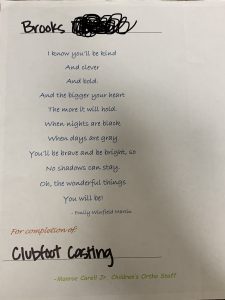 Two boots and a bar that he is required to wear until he is 4- 23 hours a day has now turned to 18 hours a day. Praise the Lord! Eventually, he will only wear his boots and bar for all day and nighttime sleep until he is 4 years old. 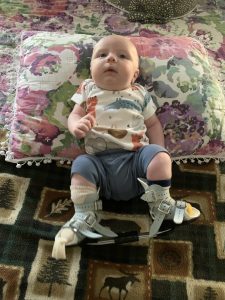 The GERD was being treated with medication but was ultimately a symptom of the Laryngomalacia.

The information I am going to share next regarding laryngomalacia is straight from a document given to me by my son’s medical provider- I do not have the source to share regarding this information.

My baby’s symptoms of Laryngomalacia included:

Our breastfeeding journey ended at 12 weeks because, with the GERD, it was no longer what was best for him or me.

And sleep… it was nonexistent for five months. We were in survival mode. We did what we had to do; what was necessary to do, not only to make sure our son was safe (since sleeping on his back was bad for his breathing), but also to protect our own mental health. My husband and I divided every night into shifts. Whoever was up stayed on the couch AWAKE holding Brooks as he slept while the other crashed in the bed. We each survived on 2-3 hours of sleep in a 24-hour period for close to 5 months. Bless my husband for doing this! He had just taken a promotion at work and was gone a minimum of 15-hours-a-day running on a constant 2-3 hours of sleep. 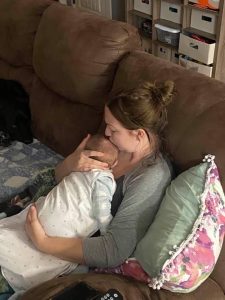 Daytime sleep was not a thing either because Brooks only slept 10-20 minutes at a time before his breathing interrupted him.

We were also busy with our five-year-old doing our very best to nurture his needs during these challenges. Many days, I feel we fell short but our family shares unconditional love and that is ultimately what got us through. My parents were able to come help us a few times and they stayed up to let us sleep! A gift- one that I will pay forward to my sons and daughter-in-law when/ if they have children. I also had a few close friends, neighbors, and other family members that offered help through listening, hospital visits, meals, and taking our five-year-old on fun playdates. Mothers never forget the people that truly show up; the ones that have your back through thick and thin with no questions asked. I am forever grateful to them.

By four months, the lovely 4-month sleep regression hit. You know, the one where a baby’s sleep cycle transitions from the two deepest stages of sleep non-REM and REM to four stages that now include two lighter stages of sleep before getting into a deep sleep. As poor as Brooks’ sleep was before this regression hit, it got even worse.   We started to notice him pushing off us when we tried to soothe him. So, you know what we did? We followed his lead and we trusted ourselves!

With pediatrician approval, we put a wedge under his mattress to elevate him and he began to sleep on his back in his crib falling asleep on his own. My husband and I continued to take shifts as his breathing would still wake him. When he didn’t need a night feed, he was able to go back to sleep on his own, even when his breathing woke him. Although his symptoms had improved some by this point, we watched him like a hawk until surgery day finally arrived (which was pushed back an entire month thanks to Covid-19 hitting our family). 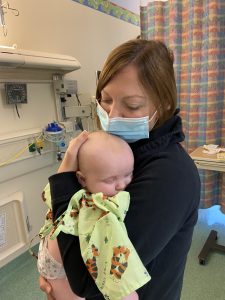 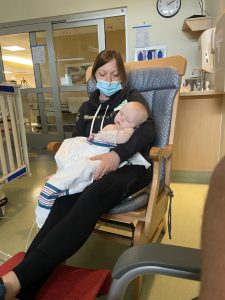 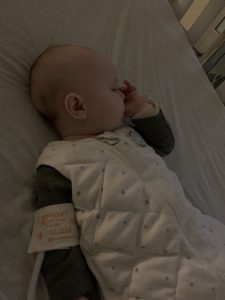 Since surgery, Brooks is truly thriving, and it fills my soul with so much joy to see. Reflux meds are over with. He can breathe and he can sleep!! He is on two naps a day, about 1.5 hours each, and he is sleeping 12 hours at night! He is the happiest baby, and he has truly congealed our family in all the best ways. 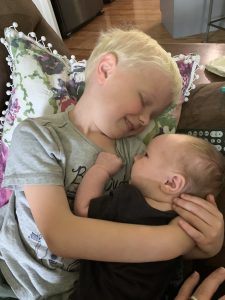 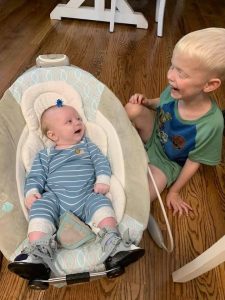 Our journey to sleep looked nothing like I thought it would. It was something that the “sleep consultant” in me truly struggled with. Many sleep tips I would typically give clients were not a viable option for us for a long time. I remember talking about this internal struggle with my sister-in-law (there is no need for the in-law-she is my sister), on a long hike one day. She told me, “Aren’t you just proving your own point? Every baby is different and there is no cookie-cutter approach.” To this day, she doesn’t know how much life she breathed back into me when she spoke that truth and wisdom to me. 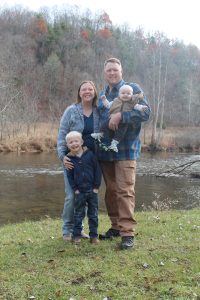