I remember being in the midst of my 3-mile run on a gorgeous November day. November 5th to be exact. This was a route I took often and had built up endurance for but for some reason I was struggling only a half mile in. I had this “light bulb” moment and thought to myself, “I think I’m pregnant!” This was a strange thought to have because my husband and I had tried to get pregnant for over a year and a half. We had been told that it was very unlikely for us to conceive again without medical intervention. Something in me just knew. I sped up to get home and took a pregnancy test- it was positive!! Naturally, I drove to CVS and bought three more tests just to be sure and YES YES YES! Excitement was an understatement. I didn’t stop smiling for days!

I knew reality would hit me. I was nervous about this pregnancy. I knew it was high risk and as much as I tried to soak it all in, the stress of it all seemed to always be overpowering.  After being hospitalized for blood clots in my leg and lungs in 2019, I knew if I was blessed with another pregnancy there would be challenges that would include LOTS of injections.

It didn’t take long for this process to start- only 6 weeks in and I was self-injecting blood thinners into my stomach daily. These injections would increase to once every 12 hours by my second trimester, and until 36 weeks gestation, and then pick back up again until 6 weeks postpartum. The bruises and the lumps allllll over my stomach were unreal. I never had time to heal before it was time for another injection. 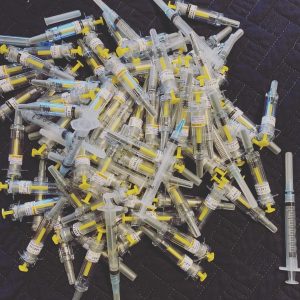 My labor was required to be very controlled. The plan included an induction at 37 weeks with week 36 being spent reversing my blood (to avoid hemorrhaging- a different blood thinner injection that should leave my system quickly and allow for an epidural when the time came) to prepare for labor. Let’s just say nothing went as planned but I will get to that later.

At my 20 week ultra sound, we found out we were blessed with another boy!!!! We were also informed that baby boy’s left foot was clubbed. I remember going into the bathroom and crying. News like that feels harsh, especially when there is a lot to learn. Trying to keep it all together in front of family and friends was unbearable at times. Although I was thankful that this was a correctable medical challenge, I was also incredibly overwhelmed by the process for correction (more on this in the next blog) as well as the numerous remarks (all made with good intentions) directed my way hinting that this was no big deal.

Journey onto the third trimester where I was kind of diagnosed with gestational diabetes? I laugh as I write this because seriously, what a mess that was! The bottom line is my sugar levels NEVER regulated for the duration of my pregnancy. Not with diet, not with medication. And they weren’t just too high either. My numbers were seriously alllll over the place. It was stressful. I was worried sick over anything I ate because I had no idea how my body was going to react.

By the third trimester, I was injecting my stomach twice a day and pricking my finger to check sugar levels 5 times a day. I was also regularly seeing my OBGYN, hematologist, and fetal maternal specialist. I was stressed, exhausted, and felt like I was always at the doctor!

Glowing during this pregnancy?!?!  I don’t think so. I was scared. I was stressed. I was worried. I felt alone even in the midst of having a very supportive husband.

Week 36 finally arrived and it was time to change my blood thinner injections. I was very clear with my hematologist that I wanted an epidural during my labor! Mamas that willingly go into labor unmedicated- ya’ll are seriously so brave and courageous!

I spent that week nesting and trying my best to relax. My parents came into town two days before I was scheduled to be induced so they could stay with our oldest boy while we were at the hospital.

On the night of June 22nd, I gave myself my blood thinner injection around 9PM and went to sleep. Around midnight on June 23rd  (the day before I was scheduled to be induced) I woke up having some contractions and feeling like I needed to pee. When I stood up a little bit leaked out. I didn’t think much about it at the time. My water never broke with my first labor so that thought honestly never entered my mind.  I wasn’t too sure at this point that this was the real deal, so I tried to go back to sleep.  It took me 36 hours to have our first baby, so I wasn’t very confident that fast labors were in the books for me.

I just couldn’t get comfortable, so I got up and walked around my bedroom for awhile. My husband woke up around 2 AM and asked me what I was doing walking around, ha! At that point, I decided to go ahead and take a shower just incase because the pain was worsening. By 3 AM I was in active labor having a hard time standing up straight. My husband got up and took a shower. I went across the house and got my mom to tell her I thought we were going to leave for the hospital soon. My mom also remembering how long my first labor was encouraged me to lay on the bed for a little longer before leaving. I tried to relax while my husband continued getting ready, but the pain was getting unbearable. I told my mom we had to leave now. As soon as I stood up there was a huge gush of water. There was no denying baby was on his way!

At this point, it was about 4:30 AM. We rushed into the truck because we had an hour drive to the hospital! Yes, I live in the boonies.  By the time we arrived at the hospital, it was 5:30AM; we told the nurses I was in labor but when they looked at my chart, they knew I was scheduled to come in at 8PM, that night to be induced! I told the nurses that water was gushing out of me and that I thought I was pretty far along. They took be back to the triage and soon admitted me. My husband went to get our bags and while he was gone, I began to vomit from the pain. The nurse then did her first check… and I was already 6cm dialated! She asked me if I wanted an epidural and I said YES.

Things began to move quickly. They moved me into the delivery room and had anesthesia on their way. By this point, it was around 7AM. I hadn’t been in the delivery room long before the anesthesiologist arrived with my epidural. He began asking me numerous questions about my medical history and then it happened…. one of my deepest fears in this pregnancy became reality. I am not sure where the miscommunication came in to play between the hematologist and anesthesiologist, but I was informed that the blood thinner had to be completely out of my bloodstream for 12 hours before I could receive an epidural! The baby was coming, and he was coming fast. I was literally staring at an epidural I could not have, experiencing the worst back labor of my life when I was told there was nothing they could do. All natural was how it had to be.

I remember looking at my husband saying, “I can’t do this!!!!!” He looked me square in the eye and said, “You can do this! You don’t have a choice!” And you know what? I did. 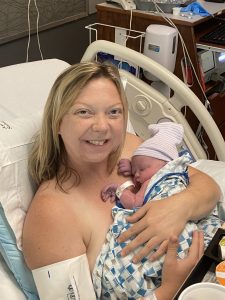 My body was so relieved once Brooks arrived. I couldn’t believe we did it. We made it. He was here. He was okay and so was I. 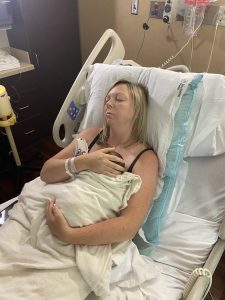 Everything about this pregnancy was challenging. We all have a story with its own set of challenges… each one being beautiful in its own way.

It took baby Brooks getting here for me to get my glow. And boy, does he make me shine. 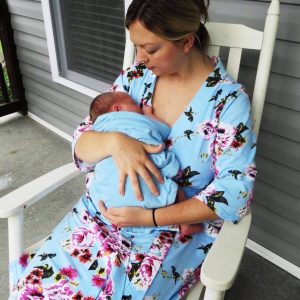